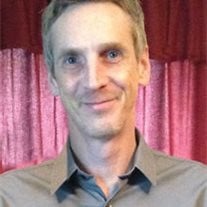 On June 11, 2015, William E. Rettie passed away after a brief illness. He was born July 8, 1964 to William and Joanne Rettie. After graduation from Cobleskill Central School, Bill attended SUNY Cobleskill and Community College of the Finger Lakes. Bill's interests included music, both as a fan and as a musician/song writer. He was a successful and respected business owner/founder. He had a keen sense for business and the entrepreneurial spirit to match. Bill is most known for his kindness, generosity, gracious warmth and his great ability to make people laugh. Bill was happiest when he was surrounded by his family and friends. Bill was predeceased by his father, William H. Rettie. He is survived by his beloved wife, Renee Maffei Rettie and their beautiful dog Gidget; his mother, Joanne Rettie of Cobleskill; sisters, Kathleen (Martin) Thomas of Troy and Barbara (Thomas) Borter of Valley Falls; and sisters-in-law, Annette (Joseph) Falzone and Doreen (Andrew) Warholic. He will be missed by nieces, Erin (Joseph) Trimarchi of Guilderland, Jennifer (Mark) Collins of Troy, and Michelle Falzone of West Pittston, PA; nephews, Jeffery (Emily Wethje) Borter of Homer, Joseph Falzone of Lancaster, CA, Tanner, Alexander and Benjamin Warholic of Cortland. He is also survived by great-nieces, Madelynn, Katherine, Braley & Alessandra and his godson, Jordan Beck. The family will be present to receive friends on Tuesday, 6/16 from 4-7 p.m. in the chapel of Riccardi Funeral Home, 69 N. Main Street, Cortland, NY. In lieu of flowers, Renee and Bill would like donations to be sent to Hubbard's Hounds Dog Rescue at PO Box 113, Homer, NY 13077 or via the link below - http://www.hubbardshounds.com/donate.php

On June 11, 2015, William E. Rettie passed away after a brief illness. He was born July 8, 1964 to William and Joanne Rettie. After graduation from Cobleskill Central School, Bill attended SUNY Cobleskill and Community College of the Finger... View Obituary & Service Information

The family of Mr. William E. Rettie created this Life Tributes page to make it easy to share your memories.

Send flowers to the Rettie family.