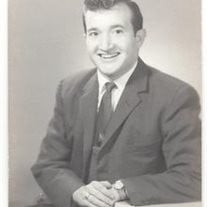 Mr. Vittorio E. Pizzola, "Vic," 77, of McGraw, passed away peacefully at home, Sunday May 7, 2017. Born April 27, 1940 in Roccacasale, Italy, Vic was the son of Antonio and Francesca Liberatore Pizzola and was a Cortland resident for most of his life. Vic attended trade school in Italy to become a barber and apprenticed under the guidance of his godfather at the age of 13. By the age of fifteen he owned and operated his own barbershop. Vic immigrated to the United States at 17 and continued his trade. He worked for Joe's Barber Shop, Messenger Barber Shop and later opened the VEP Barber Shop. He was affectionately known by his customers as "Vic the Barber" for over 60 years. He truly lived by his words, "If you love what you're doing, you'll never work a day in your life." Vic especially enjoyed spending time with his family. He embraced the role of grandpa to four grandchildren that were the light of his life. As a 25-year cancer survivor he set an example for living life with courage, strength and perseverance. Vic could always be counted on to lighten the mood with his playful sense of humor. He had an affinity for buying and selling cars, owning some 180 cars throughout his life in America. He greatly enjoyed his motorcycles, sports cars and convertibles over the years. Vic also had a special place in his heart for animals, finding joy in rescuing cats and dogs. Vic is survived by his wife, Lila, who has been by his side for 50 years; and two sons; Nicholas (Susan) of Cortland and Victor (Lorrie) of Albany, two sisters; Cesaria and Elisabetta Pizzola both of Cortland, four grandchildren; Alexandria, Lukas, Sierra and Anthony; sisters- and brothers-in-laws; Carmela and Angela Pizzola, Chuck, John, Earl and Claude Cortright and Kay Simpson; and several nieces, nephews and cousins. In addition to his parents, Vic was preceded in death by an infant brother, Gennaro, in Italy, and brothers Michele in 2015 and Gennaro in 2016. A Mass of Christian Burial will be celebrated on Friday at 10:30 a.m.in St. Anthony of Padua Roman Catholic Church. Prayers of committal will follow in St. Mary's Catholic Cemetery.The family will be present to receive friends on Thursdayfrom 5-8 p.m. in St. Anthony's Church, Pomeroy St. Cortland, N.Y. Contributions in lieu of flowers may be made in Vic's memory to Access to Independence 26 N. Main St. Cortland, N.Y. 13045. Arrangements are under the direction of Riccardi Funeral Home, Cortland, N.Y. Condolences may be sent to the family by visiting www.riccardifuneralhome.com

Mr. Vittorio E. Pizzola, "Vic," 77, of McGraw, passed away peacefully at home, Sunday May 7, 2017. Born April 27, 1940 in Roccacasale, Italy, Vic was the son of Antonio and Francesca Liberatore Pizzola and was a Cortland resident for most of... View Obituary & Service Information

The family of Mr. Vittorio E. Pizzola created this Life Tributes page to make it easy to share your memories.