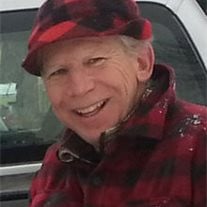 On August 20, 2016, an Amazing man was lost to us. Timothy John Butler was my best friend, husband, lover, and father to our daughters, Tara and Jordan, for 37 years, and THE BEST Grandfather EVER to Stephanie, Sean, Samantha and Gage for the last 10 years, and brother and son of 58 years. Tim's greatest joy in the last 10 years was the time he spent with his grandchildren. They were the light of his life, and he loved them with a passion beyond words. Tim is survived by his beloved wife Rayne P. (Seifert) Butler of 37 years, his daughters Tara Canada (Chris), Jordan Butler (Ben Perkins), his adored grandchildren: Stephanie, Sean, Samantha, and Gage. Tim was predeceased by his father, Franklin J. Butler. Tim is also survived by his mother, Carol Ann Butler, and siblings; Cynthia McDonald (Paul), Craig Butler (Carmen), Tina Crandall (Jeff), and Jeffrey Butler (Peg), along with nieces, nephews and many cousins. Some might try to make Tim out to be a saint, but he was not. He was amazing, that is the word that best describes my husband. Tim died as he lived, by being the strong one that saves the day. Tim drowned on August 20th after saving his much loved oldest sister, Cynthia McDonald. Unfortunately, he was not found and identified until 12:30 a.m. on the 22nd. This occurred due to a very sudden wind that caused the boating conditions on Cayuga Lake to change drastically for only a brief time. Though he saved his sister, Tim never made it all the way back to the boat himself. I know my husband, and he would do it again if given the choice, that is the kind of man he was. He was amazing. That's just the way he was. Tim graduated from Maine Endwell Schools in 1976. He attended SUNY Broome, and Tompkins Cortland Community College while working towards an Environmental Science/ Criminal Justice degree, and then changed his major to Electrical Technology. Tim was Maintenance Manager for Alpla, Inc.'s Cortland, NY, and Bowling Green, KY, plants. Most recently, he mentored a future Maintenance Manager internally to meet a rising need for individuals to lead the hi-tech Maintenance teams at the Alpla, Inc. North American plants. These maintenance teams managed highly technical electronic downstream equipment within a totally automated environment. He loved the challenge, and was highly respected by his colleagues throughout Alpla world-wide. Prior to his 8 years at Alpla, Tim worked for BorgWarner Automotive in Ithaca, NY, as Maintenance Supervisor from 1998 to 2006. Prior to that, he was Maintenance Supervisor for Rubbermaid Corporation until they closed and left Cortland, NY, in 1998. Tim could figure out how to fix anything, but look out for flying tools in the process. Great mind at work, you see. In the little spare time he had, Tim was a true outdoorsman inside and out, and musician. Tim enjoyed providing Hunter Safety Education to new hunters for over 20 years in Tompkins and Cortland Counties. He loved hunting, fishing, boating, and playing music on his guitar with his best friend of 30 years, Larry Will (Nancy) of Georgetown, NY. In addition, Tim and I enjoyed camping with, and riding, our Tennessee Walking Horses in the Adirondack Mountains. Following my treatment for breast cancer in 2011, Tim and I attended the first ever breast cancer retreat in North Carolina through Little Pink Houses of Hope (LPHOH). A year later, Tim became a volunteer for LPHOH and assisted with a week-long retreat each year since then. He was a tireless, determined, and dedicated volunteer (www.littlepinkhouses.org). Tim had a heart of gold and lived his life the way he died - giving all that he had of himself. He was amazing. A service for the family and relatives of Tim and Rayne will be at Maine Federated Church in Maine, NY on Sunday evening, August 28, 2016, at 5:00 p.m. In lieu of flowers, his family is asking for donations to help us put a special memorial bench looking out over the water from Myer's Park in Lansing, NY, to honor his memory. To help, go to www.crowdrise.com/tjbutler to make a secure donation. Thank you, The family of Timothy J. Butler Condolences may also be sent by visitingwww.riccardifuneralhome.com

On August 20, 2016, an Amazing man was lost to us. Timothy John Butler was my best friend, husband, lover, and father to our daughters, Tara and Jordan, for 37 years, and THE BEST Grandfather EVER to Stephanie, Sean, Samantha and Gage for the... View Obituary & Service Information

The family of Mr. Timothy John Butler created this Life Tributes page to make it easy to share your memories.

Send flowers to the Butler family.