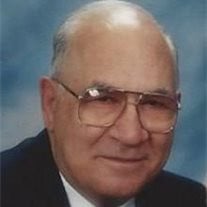 Thomas A. Aloi, 86, a lifelong resident of Cortland passed away peacefully at home surrounded by the love of all his family on Sunday, July 19th, 2015. Born on July 12, 1929, he was predeceased by his parents, Samuel and Vincenza Aloi, his brother and sister-in-law Santo and Dorothy Aloi, his sister and brother-in-law Gilda and Harry Wall, his brother-in-law John Partiganoni and father-in-law, John Larkin. Left to keep memories of Tom alive is his love of 32 years and wife, Joanne Aloi, his four children: Vicki Aloi Parker, Steve Aloi, John (Midge) Gibbs and Debbie (Rich) Florczyk along with six grandchildren: Brook (Brandon) Bailey, Michael Gibbs, Kelsie Aloi, Chloe Parker, Kaylee Florczyk and Ethan Gibbs and a great-grandson: Lyric Bailey. He is also survived by his sister Catherine (Dolly) Partigianoni, several nieces, nephews, cousins, brother and sister in laws, mother-in-law Marie Larkin and many wonderful life-long friends. Tom graduated from Cortland High School in 1947 and then went on to Coyne Electrical Vocational School from 1947 to 1948. He went in the US Army Airborne in 1948 where he attained the rank of Sergeant and made 30 parachute jumps before receiving his honorable discharge in 1952. After that he worked for General Electric, HJ Heinz Company and then for Wine Merchants LTD. Wholesale Wine Company as a greatly respected salesman for forty years, retiring in 1998. Tom is a communicant of St. Mary's Roman Catholic Church, a life time member of the Cortland Elks Club, the American Legion, the VFW, DAV and member of the Town of Cortlandville Zoning Board of Appeals. He is in the Cortland Bowling Hall of Fame and was a champion bowler while in the Army in Fort Bragg, North Carolina. Tom loved to golf, play cards at the Elks Club, follow "his" Yankees and spend time with family and friends. His grandchildren were the center of his universe. He was a loving, caring person who had a special way with people…. Tom truly was a people person. A Mass of Christian Burial will be celebrated at 10 a.m. Friday in St. Mary's Roman Catholic Church with Rev. Joseph Zareski serving as celebrant. Prayers of committal will follow in St. Mary's Catholic Cemetery. Tom's family will be present to receive friends from 4 to 8p.m Thursday in the Chapel of Riccardi Funeral Home, 69, N. Main St., Cortland. Expressions of sympathy in memory of Tom may be made to St. Mary's School. 59 N. Main St., Cortland, NY 13045 or Hospicare Cortland, 11 Kennedy Parkway, Cortland, NY, 13045. Visit www.riccardifuneralhome.com to offer online condolences.

Thomas A. Aloi, 86, a lifelong resident of Cortland passed away peacefully at home surrounded by the love of all his family on Sunday, July 19th, 2015. Born on July 12, 1929, he was predeceased by his parents, Samuel and Vincenza Aloi, his... View Obituary & Service Information

The family of Mr. Thomas A. Aloi created this Life Tributes page to make it easy to share your memories.

Thomas A. Aloi, 86, a lifelong resident of Cortland passed away...

Send flowers to the Aloi family.