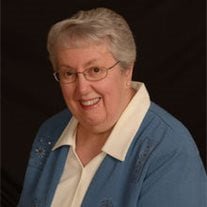 Surrounded by family, called to her lord, Mrs. Shirley Light, 84, of Cortland, passed away Thursday February 26, 2015 at Cortland Regional Medical Center after a brief illness. Born May 3, 1930 in Ogdensburg, Shirley was a Cortland resident most of her life. Shirley was previously employed at S.U.N.Y. Cortland and for many years as a Secretary at Horizon House in Cortland prior to retirement. A devout Catholic, Shirley was involved in many church organizations. She was a communicant of St. Mary's Roman Catholic Church where she served as a Eucharistic Minister and Lector. Shirley was a Spiritual Care Volunteer at Cortland Regional Medical Center where she ministered to the sick and dying. She was a member of The Legion of Mary, Altar Rosary Society and Catholic Daughters of the Americas Court # 919 Cortland. Additionally, Shirley brought communion to the residents of Northwoods Nursing Home for over 30 years. Shirley truly believed that ministry of service to others was her life. She is survived by two daughters, Debora (Paul) McCulliss of Greenwood Village, Colorado and Sharon (Joseph) Wegzyn of Cortland, four sons, James (RoseMarie) Light of Fayetteville, David (Susan) Light of Tuscon, Arizona, Brian Light of San Jose, California and Kevin (Eva) Light of Monument, Colorado, a brother, William Countryman of Rome, N.Y. and 10 grandchildren and 2 great grandchildren. In addition to her parents, Shirley was preceded in death by a sister Lorraine Baronkin and a brother, Gary Countryman. A Mass of Christian Burial will be celebrated on Monday at 10 a.m. in St. Mary's Roman Catholic Church with Rev. Joseph Zareski serving as celebrant. Prayers of committal will follow in St. Mary's Catholic Cemetery. The family will be present to receive friends on Sunday from 1 p.m.- 4 p.m. in the Chapel of Riccardi Funeral Home 69 N. Main St. Cortland. Contributions in lieu of flowers may be made to St. Mary's Catholic Church, the Humane Society or the American Heart Association. Condolences may also be sent to the family by visiting www.riccardifuneralhome.com

Surrounded by family, called to her lord, Mrs. Shirley Light, 84, of Cortland, passed away Thursday February 26, 2015 at Cortland Regional Medical Center after a brief illness. Born May 3, 1930 in Ogdensburg, Shirley was a Cortland resident... View Obituary & Service Information

The family of Mrs. Shirley C. Light created this Life Tributes page to make it easy to share your memories.

Surrounded by family, called to her lord, Mrs. Shirley Light,...

Send flowers to the Light family.