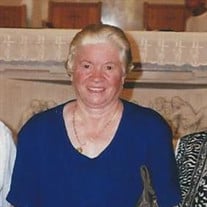 Mrs. Rosa DeStefano, 85, of Cortland, passed away on Thursday July 18, 2019 at Guthrie Cortland Medical Center after a brief illness. Born March 22, 1934 in Ferrazzano Campobasso, Italy, Rosa was a daughter of Giuseppe and Antoinette Baranello Verdone and was a Cortland resident most of her life. Rosa worked as a dressmaker in Italy and immigrated to the United States in 1967, she retired from the Crescent Corset Co. where she was employed for 30 years. She was a communicant of St. Mary’s Roman Catholic Church and a devoted member of St. Anthony of Padua Roman Catholic Church in Padua, Italy., St. Anthony being the Patron Saint of her hometown in Ferrazzano. Rosa was an extremely devoted wife and mother; she loved family, music, cooking and NBA basketball, especially her favorite team, the San Antonio Spurs. Survivors include her two daughters; Maria DeStefano and Lisa DeStefano both of Cortland; two sisters; Francesca and Maria, a sister in law and brother in law; Emma and Giovanni all of Italy and many nieces, nephews and cousins also in Italy. Rosa was preceded in death by her husband; Remo in 2016, the couple were married on February 23, 1967. A Mass of Christian Burial will be celebrated on Thursday at 12:30 p.m. in St. Mary’s Roman Catholic Church with Rev. Nathan Brooks officiating. Prayers of committal will follow in St. Mary’s Catholic Cemetery. The family will be present to receive friends on Thursday from 10:30 a.m.-12 noon prior to mass, in the Chapel of Riccardi Funeral Home 69 N. Main St. Cortland, N.Y. 13045 Those who wish to honor Rosa’s memory in the form of a contribution are asked to please consider; Robert Packer Hospital, Sayre, Pennsylvania or St. Mary’s Catholic Church. Condolences may also be sent to the family by visiting www.riccardifuneralhome.com

The family of Mrs. Rosa DeStefano created this Life Tributes page to make it easy to share your memories.

Mrs. Rosa DeStefano, 85, of Cortland, passed away on Thursday...

Send flowers to the DeStefano family.