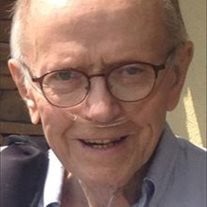 Born in Cortland, NY, on 19 May 1927, to Herbert and Stella Gorick Rhodes, and died in Cortland, NY, on 24 September 2016, after a long battle with heart disease, surrounded by his loving family. Growing up, Robert's life followed the normal... View Obituary & Service Information

The family of Mr. Robert E. Rhodes created this Life Tributes page to make it easy to share your memories.

Send flowers to the Rhodes family.