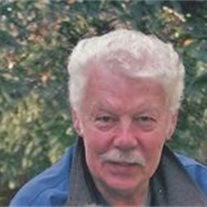 Robert Paul Comerford, 74, of Cortland, passed away Monday, November 28, 2016, after a lengthy illness at his home surrounded by his loving family. Born, July 22, 1942, in Niagara Falls, N.Y., Robert was a son of Robert Lyman and Marie Janet Fell Comerford. Robert was a graduate of St. Mary's Parochial School Class of 1960, and a communicant of St. Mary's Catholic Church. He and his wife, Marilee were married August 27, 1966, at St. Mary's Church and celebrated their 50th wedding anniversary with a small party in August with family and friends. Robert was the proprietor of R.L. Comerford & Son Heating and Plumbing for 31 years before retiring in 2006. Robert was the Past Treasurer of Cortland Master Plumbers Assoc. and a merit badge counselor for the Boy Scouts. He loved camping and R. V. traveling and was a charter member of the Lakers R.V. Club and the Empire State R.V. Club. Additionally, he was a member of the work crew of the Central New York History Center. Survivors include, his wife; Marilee Stas Comerford at home, a daughter; Roberta Anne Comerford of Syracuse, two sons; Michael W. Comerford and Mark A. (Shoshana) Comerford both of Cortland, 4 brothers; Ronald of Scott, Richard (Jerry) of Hawthorne, N.Y., James of the Czech Republic and Joseph (Lynne) of Stamford, Conn., a sister; Joan Comerford (Paul Seeber) of Cortland and his two beloved grandchildren; Fiona W. Comerford and Brigid R. Comerford. A Mass of Christian Burial will be celebrated on Friday at 10:30 a.m. in St. Mary's Roman Catholic Church with Rev. Kenneth Kirkman presiding. Prayers of committal will follow in St. Mary's Catholic Cemetery. The Comerford family will be present to receive friends on Thursday from 4-7 p.m. in the Chapel of Riccardi Funeral Home 69 N.Main St. Cortland, N.Y. Contributions in Robert's memory may be made to the Cortland County S.P.C.A. or the Central New York Living History Center. Condolences may also be sent by visiting www.riccardifuneralhome.com

Robert Paul Comerford, 74, of Cortland, passed away Monday, November 28, 2016, after a lengthy illness at his home surrounded by his loving family. Born, July 22, 1942, in Niagara Falls, N.Y., Robert was a son of Robert Lyman and Marie Janet... View Obituary & Service Information

The family of Mr. Robert Paul Comerford created this Life Tributes page to make it easy to share your memories.

Send flowers to the Comerford family.