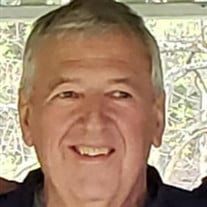 Richard Gregory Platt, 72, of Cortland, New York passed away peacefully Tuesday February 25, 2020 at the Guthrie Cortland Medical Center after a year-long battle of cancer with his family by his side. He was born July 28, 1947 in Syracuse, New York to Richard W. Platt and Mary (Brennan) Platt. He was a graduate of Mount Carmel High School in 1965, as well as, Onondaga Community College in 1972. He married Pamela (Conti) Platt in 1970 in Auburn, New York. He was self-employed at Platt Builders for 25 years. He was also a Code Enforcer for Norwich and Lansing. After retiring, he worked part-time at Access for Independence. He was known to many as Greg. He was a kind, caring son, brother, father, grandfather, husband, neighbor and friend to many. Everything he did was out of the kindness of his heart. He strived on creating smiles, and invoking laughter. He will be greatly missed by all of whom he loved, though his spirit will live on within us. He is survived by his wife, Pamela, daughters, Jennifer (Trent) McCall, Abby (Brian) Withey, grandchildren, Gabrielle McCall, Cooper Withey, and Reid Withey as well as siblings, John Wing (Meta) Platt, Geoff (Nancy) Platt, Peggy (Rick) Trivison, MaryBeth (Carl) Withey, Nona (Dan) Gormley, many nieces, nephews and cousins. He was predeceased by his parents, Richard and Mary, and brothers, Brian and Michael Platt. Family, friends and others are invited to celebrate Greg’s life at the Riccardi Funeral Home, 69 North Main Street, on Sunday, March 1st from 1-4:00 pm and at a Mass of Christian Burial on Monday March 2nd at St. Mary’s Church at 10:30. In lieu of flowers, donations can be made in Greg’s honor to the Hospice of Cortland County.

Richard Gregory Platt, 72, of Cortland, New York passed away peacefully Tuesday February 25, 2020 at the Guthrie Cortland Medical Center after a year-long battle of cancer with his family by his side. He was born July 28, 1947 in Syracuse,... View Obituary & Service Information

The family of Mr. Richard Gregory Platt created this Life Tributes page to make it easy to share your memories.

Send flowers to the Platt family.