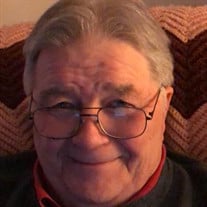 Richard E. Morehouse, Sr. of Cortland passed peacefully on February 2, 2022 at the age of 71. Rich was born in Astoria, NY. He was a member of St. Mary’s Class of 1968 and enjoyed earning varsity letters in multiple sports. Rich began his work career by entering into Sheet Metal Local #58 in Syracuse for a 4-year apprentice program and continued there 43 years. The last 23 years were at J&A Mechanical in Oswego. His many roles included sketcher, field superintendent and was the shop general foreman and head layout man for the final 13 years. He loved his job and hated to retire in 2012. Rich married his beautiful and loving wife Michele in 1981. She was the love of his life and a constant source of strength. Between the two of them, they raised six children. Together they coped with life, aging and supporting their loved ones. Rich said parenthood is the best and has enjoyed watching his children, and grandchildren, grow. Following his retirement, Rich was blessed to run “Papa Daycare” for his grandchildren. Rich believed family is #1, no matter what. Rich is survived by his children Rich Morehouse, Jr, Amber (Stephen) Morehouse Cheever, Michael Scott, Kelly Botz, Tim Botz, Nicole Dintino, Angela (Billy) Wells and grandchildren—Samantha, Ashley, Ben, Hailey, Hayden, Alex, Logan, and Bailey. He is also survived by his brother, Chuck (Patty) Morehouse, cousins, nieces and nephews. He was heartbroken by the passing of his bride, Michele, in 2018. He was predeceased by his parents Earl and Jeanette Morehouse, Dorothy Morehouse and Roscoe “Rocky” Couts. Rich loved having dogs in his life over the years. In lieu of flowers, please make a contribution in his honor to Cortland SPCA 819 McLean Rd., Cortland, NY 13045 or https://cortlandspca.org/donate. Private services will be held for the family and close friends. Rich loved to remember the past, not to live in it, but to enjoy the memories and be thankful for it. In his honor, the family would like to thank The Renzi Cancer Center, Guthrie Medical Center and Riccardi Funeral Home.

Richard E. Morehouse, Sr. of Cortland passed peacefully on February 2, 2022 at the age of 71. Rich was born in Astoria, NY. He was a member of St. Mary&#8217;s Class of 1968 and enjoyed earning varsity letters in multiple sports. Rich began... View Obituary & Service Information

The family of Mr. Richard E. Morehouse Sr. created this Life Tributes page to make it easy to share your memories.

Send flowers to the Morehouse family.