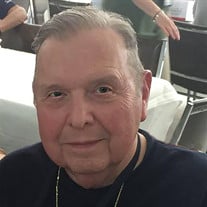 Former Cortland resident and St. Mary’s Permanent Deacon Richard J. “Dick” Dwyer, 86, was welcomed into the arms of the angels on August 15th, 2021, Assumption Sunday. Born March 3, 1935, Deacon Dick was the only son of F.H. “Dick” and Doris Oliver Dwyer, and beloved brother to Nancy Downes and Dee Gleason and the late Joan Tomidy. A graduate of St. Mary’s School, he enlisted and served in the United States Air Force during the Korean War before suffering an injury that landed him in the hospital for nearly a year and left him disabled. Throughout his recuperation and the rest of his life, he relied heavily on the love of his life, Coraljean Willis, whom he married in 1957. After attending Central City Business Institute, Dick began a career at Smith Corona, where he worked as a Purchasing Agent for 33 years. In 1979, Dick received a spiritual calling to participate in a journey of faith that resulted in his being ordained as a Permanent Deacon in the Roman Catholic Church in 1981 as a member of the third Diaconate Class for the Diocese of Syracuse. Deacon Dick, a lifelong communicant of St. Mary’s Church in Cortland, specialized in ministering to Senior Citizens in both of Cortland’s Senior High Rise Buildings and area nursing homes. After retiring from Smith Corona in 1993 and in addition to his duties as a deacon, Deacon Dick accepted a position as the Business Manager for St. Mary’s Parish. Deacon Dick was an Honorary member of the Knights of Columbus and achieved the 3rd and Fourth Degrees. He serves as the Grand Knight of Cortland Council #233 four different times and was District Deputy of five Councils for two years before becoming a member of the Knights of Columbus Our Lady of Perpetual Help Council #5269 in Vero Beach, Florida, where he and Coraljean relocated in 2002. In addition to his devoted bride, Coraljean, Deacon Dick is survived by his son, Joseph Dwyer and fiancée Maria O’Shea of Florida, daughters Wendy Dwyer and her husband, Daniel Hafner of Virginia, Kelley Dwyer of Texas, former daughter-in-law Cindy Dwyer, grandchildren Hilary Dwyer (Luke Thornton) and Christopher Dwyer (Rachel Baldwin), JP and Chrystina Hafner, Alicia and Evan Kletter, Sasha and Tamara Hafner, Claire Hafner, and Andre and Luciana Hafner, along with eight great-grandchildren, and scores of nieces and nephews. In an effort to ensure the health and safety of all who might wish to attend, services for Deacon Dick, which are being handled by Deacon Dick’s beloved nephew, Bryan Riccardi of Riccardi Funeral Home, will be scheduled for a later date. In lieu of flowers, the family requests that donations be made to St. Mary’s Church or St. Mary’s School. Those wishing to honor the memory of Deacon Dick are asked to extend an anonymous kindness to someone else, not for recognition but simply because Jesus taught us that we are meant to treat one another with love and kindness,

The family of Mr. Richard J. Dwyer created this Life Tributes page to make it easy to share your memories.

Send flowers to the Dwyer family.