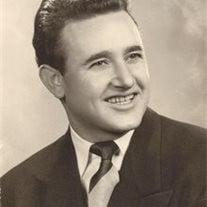 Michele Pizzola "Mike", 81, of Cortland, passed away Thursday July 2, 2015 at his home surrounded by his loving family. Born October 28, 1933 in Roccacasale, Italy; Mike was the son of Antonio and Francesca Liberatore Pizzola. Mike immigrated to the United States from Italy at the age of 21. He retired from Smith-Corona in Cortland after 30 years of employment. He was a communicant of St, Anthony of Padua Roman Catholic Church and served as an Usher and volunteered with the St. Anthony's Festival. He was a member of the Moose Lodge, San Rocco Lodge and volunteered with Cortland Regional Medical Center and Access to Independence. Additionally, Mike was an avid gardener, enjoyed making his own wine, and playing Bocci. Mike enjoyed weekly card playing with his family and cousins. He loved to travel, with his wife Carmela. They toured Europe for their 30th anniversary, Hawaii for their 40th, and enjoyed a Mediterranean cruise for their 50th wedding anniversary.Mike loved his children and grandchildren and enjoyed every moment he spent with them. He is survived by his wife of 54 years; Carmela Testa Pizzola; and three children; Frances A. Pizzola and Michael (Mika) Pizzola both of Cortland and Maria (Mike) Dafoe of Homer, two brothers; Gennaro (Angela) Pizzola and Vittorio (Lila) Pizzola both of Cortland., two sisters; Cesaria Pizzola and Elisabetta Pizzola, also both of Cortland. 4 granddaughters, Marina, Adrianna, Sophia and Nina Pizzola., and his beloved dog, Sammi., and many nieces, nephews and cousins. In addition to his parents, Mike was also preceded in death by a brother, Gennaro. A Mass of Christian Burial will be celebrated on Monday at 10 a.m. in St. Anthony of Padua Roman Catholic Church with Rev. Joseph Zareski serving as celebrant. The Christian Rite of committal will follow in St. Mary's Catholic Cemetery. The family will be present to receive friends on Sunday from 2-5 p.m. in St. Anthony's Church, Pomeroy Street, Cortland.Contributions in lieu of flowers may be sent to St. Anthony's Church 59 N. Main St. Cortland, NY 13045. Arrangements are under the direction of Riccardi Funeral Home, Cortland, N.Y. Condolences may also be sent to the family by visiting www.riccardifuneralhome.com

The family of Mr. Michele "Mike" Pizzola created this Life Tributes page to make it easy to share your memories.