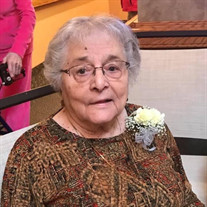 Mary A. Patriarco passed away at the age of 98 at Providence Place Hospice in Waco, Texas on December 25, 2020 of natural causes. She was born in Cortland, NY to Celestino and Madalena (D’Angelo) Ferro on January 8, 1922. She was the oldest of 9 children. She also lived with her daughter, Jacqueline and family, in Pine City, NY and later moved to Hewitt, Texas to live with her daughter Jeanne. She was married to Jack Sonnacchio who died in 1973. She later married Geno Patriarco who died in 2006. Mary was an accomplished watercolor painter and had won awards in local competitions. She loved to paint towns in Italy that she had visited, particularly Castleforte, Italy which was her father’s birthplace. Most of us have a painting to remember her by and they are our cherished treasures. Mary was a Cortland Hospital Auxiliary member for 20+ years. If you ever bought a flower arrangement from the gift shop, chances are it was one she made, and her flowers and wreaths were part of many successful fund raising efforts led by the hospital. Her and her granddaughter Susan shared the same birthday. Mary was predeceased by her parents, Celestino and Madalena (D’Angelo) Ferro; her beloved husband, Jack; and her husband, Geno Patriarco; brothers, James and Robert Ferro; sisters, Esther Stiles and Anna Pennello; sister-in-laws Gilda Contento and Lucy Distin. Mary was a communicant of St. Anthony of Padua Roman Catholic Church. She is survived by her daughters, Jeanne (Ed) Passalugo of Hewitt, Texas; Jacqueline (Tim) Meyer of Pine City NY, step-sons; Gene (Connie) Patriarca of Springfield, VA, Vincent (Carol) and Nicholas (Wendy) Patriarco of Cortland, NY. Mary had 12 grandchildren; Susan (Dan) Pfleging, Jack (Cheryl) Passalugo, Jennifer (Evan) Geibel, Richard (Sonya Langan) Petrucco, Patrick Meyer, Christine (Troy), Gina, Lisa Patriarca, Leslie, Suzanne, Dante and Gracie Patriarco. She is also survived by 2 great-grandchildren; Andrew and Madeline Pfleging, sisters; Tina Paul of Dewitt and Patricia Durkee of Cortland, brothers; Salvatore (Maybelle) of Cortland and Richard (Marie) Ferro of Nags Head, NC, several nieces, nephews, and cousins. The family would like to thank the nurses and staff of Providence Hospice and Providence Place for their tremendous care, gentleness and compassion in caring for our mom. Due to the pandemic a private burial for family only will be held in St. Mary’s Catholic Cemetery. A Memorial Mass will be scheduled for the summer. In lieu of flowers donations can be made in memory of Mary Patriarco to Providence Place Hospice. 6700 Sanger Avenue, Waco, TX 76710 or Woodbrook Foundation 1250 Maple Ave Elmira, N.Y. 14904. Please note in your contribution that your donation is in honor of Mary Patriarco. Arrangements are under the direction of Riccardi Funeral Home 69 N. Main St. Cortland, N.Y.

Mary A. Patriarco passed away at the age of 98 at Providence Place Hospice in Waco, Texas on December 25, 2020 of natural causes. She was born in Cortland, NY to Celestino and Madalena (D&#8217;Angelo) Ferro on January 8, 1922. She was the... View Obituary & Service Information

The family of Mrs. Mary A. Patriarco created this Life Tributes page to make it easy to share your memories.

Mary A. Patriarco passed away at the age of 98 at Providence...

Send flowers to the Patriarco family.