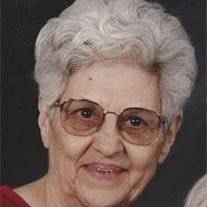 Mrs. Mary L. D'Addario, 90, of Cortland, passed away, Wednesday March 9, 2016 at Cortland Regional Medical Center. Mary was born May 28, 1925 in Lockport, N.Y., the daughter of Remo and Alberina D'Intino Dintino., she married her husband of 59 years, Dr. Arthur D'Addario in 1948., they then moved to Cortland in 1949. Mary was a communicant of St. Anthony of Padua Roman Catholic Church and a member of their Altar Society. She remained active in many school and church projects as well as operating Mary's Grocery Store on Central Avenue for 22 years., before working at Cortland Memorial Hospital for 27 years before her retirement in 2005. Mary was also an active member and Past President of the Stella D'Oro Lodge. But Mary's greatest joy was her children, grandchildren and great grandchildren. Mary was predeceased by her parents, her husband Arthur, a son John, her brothers, Anthony, Bill and Joseph and her granddaughter, Cassidy D'Addario. Mary is survived by her children, Raymond of Cortland, Linda (John) Cafarelli of Clifton Park, N.Y., Arthur (Mary) of LaFayette, Paul (Deborah) of Arlington, Va; James (Margaret) of Cortland, Martin (Loreen) of Rochester, and Robert (Kathleen) of Cortland; grandchildren; Angela D'Addario, Gabrielle (Kris) Zacuto, Sophia D'Addario, Anthony (Jessica) Cafarelli, Antoinette, Norman, Gregory and Andrew D'Addario, Jennifer (Robert) Reeve and Joseph and Nicholas D'Addario., great grandchildren; Gracie and Charlie Zacuto and Asher Reeve. Mary is also survived by a sister; Sylvia (Donald) Cotriss of Watervilet, N.Y. and sisters in law, Dorothy Dintino and Janet D'Addario both of Florida. A Mass of Christian Burial will be celebrated on Monday at 11 a.m. in St. Anthony of Padua Roman Catholic Church with Rev. Joseph Zareski serving as celebrant. The Christian Rite of committal will follow in St. Mary's Catholic Cemetery. The D'Addario family will be present to receive friends on Sunday from 2-4 p.m. in the Chapel of Riccardi Funeral Home 69 N. Main St., Cortland, N.Y. In lieu of flowers in was Mary's request that contributions in her memory be made to Franziaka Racker Centers 3226 Wilkins Rd. Ithaca, N.Y. 14850 or a charity of your choice. Condolences may also be sent to the family by visiting www.riccardifuneralhome.com

Mrs. Mary L. D'Addario, 90, of Cortland, passed away, Wednesday March 9, 2016 at Cortland Regional Medical Center. Mary was born May 28, 1925 in Lockport, N.Y., the daughter of Remo and Alberina D'Intino Dintino., she married her husband of... View Obituary & Service Information

The family of Mrs. Mary L. D'Addario created this Life Tributes page to make it easy to share your memories.

Send flowers to the D'Addario family.