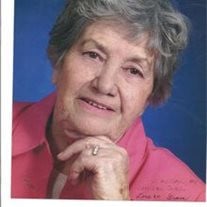 Barbara M. Haskell, 88, of Cortland, N.Y., passed away, Monday, May 28, 2012 at Cortland Regional Medical Center. Born, March 28, 1924 in Brooklyn, Barbara was the daughter of Geoffrey H. and Ethel Harbo Minnis. Barbara grew up in Hastings on Hudson and was a graduate of Cortland State where she received her Bachelor of Arts Degree and a Masters Degree in American History. She had taught and retired in 1983 from Homer Central School and had also taught at Smith Elementary and the Campus School. She was a communicant of St. Mary's Roman Catholic Church in Cortland and The Church of Our Savior in Cocoa Beach, Florida. Barbara was a member of several P.T.O. 's , the Mother's Club, Ladies Literary, the Board of Directors of Alpha Sig Sorority and had volunteered at Cortland Regional Medical Center. Barbara adored her grandchildren, and attended all of their activities throughout their lives. She is survived by two sons; James G. Haskell of Auburn, Joseph (Theresa) Haskell, Jr. of Cortland, two daughters; Constance (Michael) Vormwald of Groton and Mary Ann Haskell of San Diego, California., three sisters; Patricia Daly, Joan Minnis and Janet Hunt all of Queensbury, N.Y., four grandchildren, Timothy Haskell ( Matthew Gross), Erin Haskell (Giles Cunningham) Sean Haskell and Abigail Vormwald, and two great grandchildren, Tobias and Francis Cunningham. In addition to her parents Barbara was preceded in death by her husband, Joseph Haskell, Sr., her son, Thomas Haskell and a sister, Una Galli. A Mass of Christian Burial will be celebrated on Friday at 11 a.m. in St. Mary's Roman Catholic Church with Rev. Lucian Urbaniak serving as celebrant. Prayers of committal will follow in St. Mary's Catholic Cemetery. The family will be present to receive friends on Thursday from 4-7 p.m. in the Chapel of Riccardi Funeral Home 69 N. Main St., Cortland, N.Y. Contributions in her memory may be made to St. Jude's Children's Research Hospital 501 St. Jude Place; Memphis, Tennessee 38105

The family of Mrs. Barbara M. Haskell created this Life Tributes page to make it easy to share your memories.