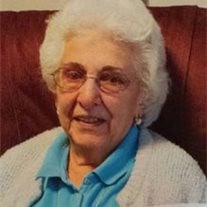 Lorraine G. Cross Wethje, formerly of Cortland, NY passed away at Unity Hospital in Rochester, NY on Tuesday June 23, 2015 at the age of 91. She was predeceased in 2012, by the late Edward W. Wethje. They were happily married for 66 years. She was born July 7, 1923, the daughter of Frank and Eleanor Drum Cross of Syracuse, NY. Ed and Lorraine resided in Syracuse prior to moving to Cortland in 1960. Lorraine was a seamstress with her mother in Syracuse, she worked at G.E., the Crescent Corset Company, and she lovingly cared for many preschool children in her home prior to retiring. She also volunteered at Cortland Memorial Hospital for many years. She was a former communicant of St. Mary's Roman Catholic Church in Cortland. A devout Roman Catholic, Lorraine once aspired to become a nun and even attended convent school in Syracuse. However, her plans quickly changed when she met her husband Ed. They proceeded to raise 6 children, and were blessed with 21 grandchildren and 33 great-grandchildren. She is survived by her sons Thomas Wethje and his wife Patricia, Ted Wethje and his wife Donna, Richard Wethje and his wife Lyn, Lawrence Wethje and his wife Stephanie, and her daughters Nancy and her husband Bill Guyette, and Sandra and her husband Ken Ferguson. Lorraine was predeceased by her sister Dorothy Cross Beil and her brother Richard Cross. Lorraine enjoyed playing bingo, cards, casino games, and travelling to the Connecticut shore with her husband. She was an avid supporter of her children and grandchildren's sports and activities. Lorraine proudly supported the New York State instant lottery scratch-off game. In 2009, Lorraine and Ed moved to Westwood Commons, N. Chili, NY where they lived together for 18 months. Ed then moved to a skilled nursing facility for the next 18 months where Lorraine regularly visited him until his passing in 2012. The family would like to thank Westwood Commons and staff, a DePaul Community, for their loving care provided to Lorraine and Ed. A Mass of Christian Burial will be celebrated on Friday at 1:30 p.m. at St. Mary's Roman Catholic Church, Cortland, N.Y. with Rev. Joseph Zareski serving as celebrant. The Rite of committal will follow in St. Mary's Catholic Cemetery. The family will be present to receive friends on Friday from 12 p.m- 1 p.m. in the Chapel of Riccardi Funeral Home 69 N. Main St. Cortland, N.Y. In lieu of flowers memorial donations can be made in their name to DePaul, Westwood Commons, 1931 Buffalo Road, Rochester, NY 14624. Condolences may be sent to the family by visiting www.riccardifuneralhome.com

Lorraine G. Cross Wethje, formerly of Cortland, NY passed away at Unity Hospital in Rochester, NY on Tuesday June 23, 2015 at the age of 91. She was predeceased in 2012, by the late Edward W. Wethje. They were happily married for 66 years. She... View Obituary & Service Information

The family of Mrs. Lorraine G. Cross Wethje created this Life Tributes page to make it easy to share your memories.