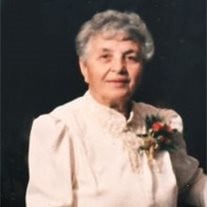 Lina Spaziani Pace, age 90, passed away peacefully at her home on February 18, 2015 after a lengthy illness. Lina was born July 12, 1924 in Sgurgola, Frosinone, Italy to Antonina and Michael Angelo Spaziani. She immigrated to Cortland, NY in May of 1950 and worked at Dom's Grill. In October she married Anthony J. Pace (Tony) at St. Thomas Cathedral in Arlington Virginia. They raised four sons together. In 1962 Lina began working at the Cresent Corset Co. where she was employed until her retirement in 1984. As a child, the Sisters of Matutine educated Lina where she developed a close relationship with Mother Superior Gabriella Compili and developed a love of music, singing in the Children's Choir of St. Maria, her home parish in Sgurgola. She loved dancing around the house to Italian folk music, 1950s and 60s American rock and roll and listening to her favorite artist Andrea Bocelli whose music of Italy and of the church brought her great comfort these last few years. Lina was passionate about gardening and preparing meals from scratch for her family. The importance of having her family together around the dinner table was a tradition she brought from the old country and valued throughout her life. Many life lessons were passed on and nurtured around "la tavola" during those incredible meals. Love God, honor your family, work hard, and give your best in everything were among the many lessons that were modeled. In addition to raising her four boys and working at the Crescent Corset, Lina attended night school and earned her citizenship in 1962. She was proud of her accomplishment and loved being a US citizen, voting in every election since 1962. Lina loved and adored her grandchildren Michaela and William, especially when she was able to spoil them with grandma's famous Biscotti Scottolati or as they called them, "grandma's bagels" and other sweet treats when she cared for them before entering school. Grandma is so proud of the wonderful, talented, intelligent and young adults they have become. Lina's cat Sparkle was a faithful companion from sun up to sundown. They were inseparable and trilingual, often communicating in Cat, Italian and English. Her love for Sparkle was unconditional and never-ending. Lina was predeceased by her husband Tony, brother Angelo, her sister: Ida Martini and brothers-in-law Adamo Martini, Ethan and Dominick Pace, her sisters-in-law: Nancy and Betty Pace and her nieces: Rita Martini Fabiano, Jacqueline Spaziani and nephew Greg O'Connell. Lina is survived by her sons: Daniel (Nancy) of Lansing, Joseph of Lancaster, Michael (Jill) and Anthony of Cortland; her grandchildren Michaela and William; her brothers: Reno (Anna), Siro (Luciana), Mario (Rossana) and sister in law Connie Spaziani, her cousin and best friend Lia Trombetti all of Rome and Sgurgola, Italy, and many nieces, nephews and cousins in the US and in Italy. Calling hours will be at Riccardi Funeral Home, 69 North Main St. in Cortland on Friday, February 20, 2015 from 4:00 to 7:00 PM. A Mass of Christian Burial will be celebrated by Father Joseph Zareski at St. Anthony's Church on Saturday, February 21, 2015 at 10:00 AM with internment following at St. Mary's Cemetery. The Pace family would like to thank Hospice Care of Tompkins County, in particular nurse Corey Stevens and social worker Jennifer Williamee for the excellent care our mother received. We would also like to thank Dr. Malakar and Home Care of Rochester (HCR) for the valuable services they provided. Donations in Lina's memory can be made to your local Hospice Care program or to St. Anthony's Church, 59 North Main St., Cortland, NY 13045.

Lina Spaziani Pace, age 90, passed away peacefully at her home on February 18, 2015 after a lengthy illness. Lina was born July 12, 1924 in Sgurgola, Frosinone, Italy to Antonina and Michael Angelo Spaziani. She immigrated to Cortland, NY in... View Obituary & Service Information

The family of Mrs. Lina Spaziani Pace created this Life Tributes page to make it easy to share your memories.

Lina Spaziani Pace, age 90, passed away peacefully at her home...

Send flowers to the Pace family.