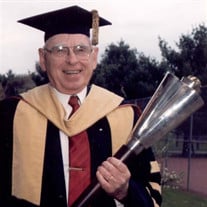 Dr. Joseph W. Brownell, retired professor of Geography and Cartography at SUNY Cortland, passed away on Sunday, Dec. 8, 2019 at Guthrie-Cortland Nursing and Rehabilitation Center at the age of 92. He had been recovering from hip surgery following a recent fall. He was born to Roland and Catherine (Griffin) Brownell on May 25, 1927 in New Bremen, N.Y. Dr. Brownell married Kathryn Emerson in 1955 and together they raised three children. Dr. Brownell was a graduate of Syracuse University and was a member of the SUNY Cortland faculty for more than half a century. He was a professor of geography from 1956 until his retirement in 2001, but continued teaching part-time for many more years. He served as chair of the geography department for several years. At the time of his retirement, he was the most senior faculty member in the college’s history. Dr. Brownell also taught at the University of Alberta and the University of Manitoba while on sabbaticals in the 1950s and 1960s. An accomplished author, Dr. Brownell wrote “Adirondack Tragedy: The Gillette Murder Case of 1906” (with Patricia W. Enos), and a followup book, “Cortland to the Adirondacks: A Fateful Journey in 1906.” He was considered a leading authority on the subject and lectured extensively. He also wrote a novel, “The Albany Road: A Boy, the Adirondacks and War,” and a short story, “Ticker, The Timid Star.” He also published several geography reports and written family histories. As the son of a CCC Camp Superintendent, Dr. Brownell grew up living in a different community every year, moving as far south as Virginia. He never attended the same school for consecutive years until he was in high school. Dr. Brownell was a historian and loved researching. He had an amazing capacity for detail and he once traveled to Detroit to take a picture of a headstone in a cemetery. Dr. Brownell traveled extensively through Europe, the United States and Canada. Every summer he packed his family of 5 into a VW Beetle and travel to someplace new, usually a location of historical or educational significance. Dr. Brownell was a HAM radio operator (W2BSI), photographer (the downstairs bathroom was a dark room for several years), stamp collector, coin collector and genealogist. For several years he drew political cartoons for the Cortland Standard under the pseudonym Cecil Harford. Dr. Brownell was also an actor who loved performing with campus or community theater groups. Dr. Brownell served in the U.S. Navy during both World War II and the Korean War. He was a humble man who often deflected gratitude expressed by others for his service because he did not serve in combat. He was the epitome of kindness and patience. He loved teaching and stayed in contact with many of his former students. He was proud of his Irish heritage and loved listening to Irish folk songs and watching Irish dance and music performances. Dr. Brownell’s survivors include a son, Greg Brownell of Queensbury, N.Y., daughters Linda Brownell (Charles) Glover of Marathon, N.Y., daughter Sharon Brownell (Jon) Redfield of Fredonia, N.Y., grandsons Sean, Jacob and Kevin Redfield of Fredonia, N.Y., step-grandchildren Brooke Glover of Marathon, N.Y., and Kaitlyn Glover of Cortland, N.Y., and step-great grandchild Trevor Howe of Cortland, N.Y. He was predeceased by his wife, Kathryn Emerson Brownell, and a brother, John R. Brownell. Funeral services will be conducted on Saturday, Dec. 21, 2019 at 10 a.m. at Grace Holy Spirit Church, Court St., Cortland, N.Y., Rev. Peter Williams officiating, with a luncheon afterward. The family will be present to receive friends on Friday Dec. 20, 2019 from 4-6 p.m. from the Chapel of Riccardi Funeral Home 69 N. Main St. Cortland, N.Y. 13045. Those wishing to honor Joseph’s life are encouraged to donate to the Cortland County Historical Society. Alternatively, please consider performing acts of kindness and giving back to your community in ways such as donating blood and/or plasma, exercising your right and responsibility to vote, mentoring children, volunteering, shopping at independent small businesses, adopting from shelters or simply buying a cup of coffee for the next person in line. The family would like to thank Walden Place for their kindness and support and for promoting the dignity and independence of all the people who have made their home there; Grace Holy Spirit Church for being an extension of his family; the Cortland County Historical Society for their enthusiastic support of Dad's projects. Condolences may also be sent to the family by visiting www.riccardifuneralhome.com

Dr. Joseph W. Brownell, retired professor of Geography and Cartography at SUNY Cortland, passed away on Sunday, Dec. 8, 2019 at Guthrie-Cortland Nursing and Rehabilitation Center at the age of 92. He had been recovering from hip surgery following... View Obituary & Service Information

The family of Dr. Joseph W. Brownell created this Life Tributes page to make it easy to share your memories.

Send flowers to the Brownell family.