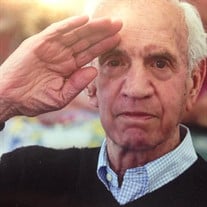 John J. Stevens, 95, of Cortland, NY passed away on August 25, 2019. He died peacefully surrounded his family. “Johnny” was born in January 16, 1924, the son of Michael and Lena (Di Stefano) Stevens. Johnny was a lifelong resident of Cortland who loved the South and East Ends as well as anything Cortland. During World War II, he served bravely in the US Army in Europe as a medic and cook. Upon returning home, he married his wife of 71 years, Mary Louise Stevens. Johnny, along with his wife, were the owners of Johnny’s “Famous” Drive-In Restaurant. Many friends patronized his restaurant to enjoy his hot sausage and the lively conversation. Johnny was a parishioner of St. Anthony of Padua Roman Catholic Church and enjoyed his time working at church events. Johnny loved to celebrate his favorite holiday, St. Anthony’s Day. He was also Member Emeritus of the Old Timers Band where he played the bass drum for many years. Johnny is survived by his wife, Mary, his sister Beatrice (James) O’Mara and brother Robert (Kay) Stevens, his children Christy and James Stevens, grandchildren Susannah (Vernell) Ollivierre, Julie (Christopher) Simser, Darius Stevens and Autumn Rae Stevens, several great-grandchildren, great-great grandchildren and nieces and nephews. In addition to his parents, Johnny was predeceased in death by his siblings Albert (Helen) Stevens, James Stevens, Dorothy (Robert) Stoker, Norma (Jerome) Lundberg and Betty Ann (Edward) Purser. Our grandfather was proud of his country, his friends, his family, his faith and his Italian heritage. He will be greatly missed. A Mass of Christian Burial will be celebrated at St. Anthony of Padua Roman Catholic Church on Thursday, August 29th at 10:30 a.m. with Rev. Nathan Brooks serving as celebrant. Prayers of committal with full military honors will follow in St. Mary’s Catholic Cemetery. In lieu of flowers, kindly consider a donation to St. Anthony’s Church. Arrangements are under the direction of Riccardi Funeral Home, Cortland, N.Y. 13045 www.riccardifuneralhome.com

The family of Mr. John J. Stevens created this Life Tributes page to make it easy to share your memories.

Send flowers to the Stevens family.