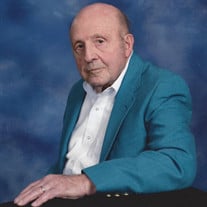 James E. Perfetti, “Jim” born March 7, 1930, passed away September 14, 2019 at home with family and friends at his side after a recent battle with Parkinson’s disease and declining health. Jim was predeceased by his parents, Edward and Antoinette Perfetti, as well as sisters, Mary Parelli and Laura Perfetti. Jim was the devoted husband of Libby Natoli Perfetti for 52 years before her death in 2006. Surviving are sisters; Adeline Smith, Ceil Semeraro and Irene Perfetti all of Cortland and Jean Griswold of Virginia, brother; Charles Perfetti of Canandaigua, N.Y., and brother in law; John (Barb) Natoli of Sayre, Pennsylvania. He also leaves several nieces and nephews in addition to a cadre of special friends in the Cortland community. He will be missed by his coffee buddies as well as those with whom he volunteered at St. Anthony’s Church. Jim received his secondary education at Cortland High School prior to entering military service. He married his high school sweetheart in 1954. (‘The best decision I have ever made’ ) After running the Hamlin Street market for many years he went to work for Brockway Truck, ultimately retiring from Mack Truck. The family is indebted to caregivers, Carl and Mary Fadale, Bob and Judy Risavi, Phil and Shirley Calabro, Eddie Griswold and Paul Semeraro who spent countless hours attending to Jim as his needs increased. In keeping with Jim’s wishes there will be no calling hours. A Mass of Christian Burial will be celebrated on Wednesday September 18th 2019 at 11 a.m. in St. Anthony of Padua Roman Catholic Church. Prayers of committal will follow in St. Mary’s Catholic Cemetery. In lieu of flowers please consider a donation to the Parkinson’s Association or to the Cortland Hospice. Arrangements are under the direction of Riccardi Funeral Home, Cortland, N.Y. www.riccardifuneralhome.com

The family of Mr. James E. Perfetti created this Life Tributes page to make it easy to share your memories.

Send flowers to the Perfetti family.