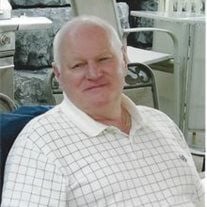 Harry Gibbs, 68, of Minoa, NY passed away Monday, March 13, 2017 after a lengthy illness. Harry was born in New Jersey on September 2, 1948. He was the son of Grace Irene Van Arsdale and Theron Hoyt Gibbs and the youngest of 8 children. Harry spent his early years in the Waterloo area, then coming to Cortland and eventually he moved to Minoa where he resided when he passed away. Harry was a hard worker his entire life with a wonderful work ethic. He drove truck most of his career retiring from USF Red Star. Prior to that, Harry was employed by Economy Paving and Gutchess Lumber. He was a warm hearted, passionate person. Harry loved his summers at A-Bay which included boating and time with family. In his younger years he enjoyed camping with his family and friends. Harry was an avid past Boy Scout leader and past Homer Elks Member. He enjoyed his times at the casino and watching the horses with friends. Harry was predeceased by his parents, his brother Bob, his sister Charlotte and an infant sibling Arthur. He is survived by his wife, Deborah Harvey Gibbs; his son, John (Midge) Gibbs; his daughter, Debbie Florczyk and his step-son, Michael Harvey; three grandchildren: Michael Gibbs, Kaylee Florczyk and Ethan Gibbs. He is also survived by his brother Andy, his sisters Joanne, Marion and Grace along with several nieces and nephews. The family will be present to receive friends from 5 to 7pm on Friday in the Chapel of Riccardi Funeral Home, 69 N. Main St., Cortland. A brief funeral service will take place immediately following at 7pm. Expressions of sympathy in memory of Harry may be made to Upstate Golisano Children's Hospital, 1 Children's Circle, Syracuse, NY 13210 or St. Jude Children's Research Hospital, 262 Danny Thomas Place, Memphis, TN 38105. Visit www.riccardifuneralhome.com to offer online condolences.

Harry Gibbs, 68, of Minoa, NY passed away Monday, March 13, 2017 after a lengthy illness. Harry was born in New Jersey on September 2, 1948. He was the son of Grace Irene Van Arsdale and Theron Hoyt Gibbs and the youngest of 8 children. Harry... View Obituary & Service Information

The family of Mr. Harry Gibbs created this Life Tributes page to make it easy to share your memories.

Send flowers to the Gibbs family.