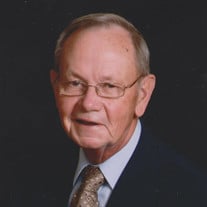 Mr. Donald H. Brooks, 80 of Cortland, N.Y. passed after a short illness on October 15, 2021. Don was born on October 8, 1941 in Syracuse, N.Y. to the late Howard and Katherine Brooks. He was a graduate of Most Holy Rosary High School and attended Kings College in Pennsylvania. Don served his country with the 108th Tactical Control Squadron of the NY State. He began his career in retail at EW Edwards and retired as Vice-President of Human Resources at Service Merchandise. After retiring Don became a licensed real estate agent with Yaman and Testa Real Estate. Don was a communicant of St. Mary's Catholic Church where he served as a greeter, bingo volunteer, usher and gift bearer. Don was a Junior Achievement Advisor, active with Cub and Boy Scouts, a volunteer at Guthrie Cortland Medical Center and volunteered with the Community Day of Caring. He enjoyed being with his family, helping his neighbors and following S.U. Football and basketball games along with following Red Sox Baseball and watching Golf. Surviving is his wife of 54 years; Patricia Kelleher Brooks, daughter; Theresa (William) Jones, sons; David (Grace) Brooks and Kevin (Rima) Brooks., five grand children, Kiersten and Kaitlyn Jones, McKenzie, Keegan and Liam Brooks. His sisters; Margaret Bryerton, Katherine Garlock, Rhoda (Tony) Lambiase, Julie (Paul) Corbett and many nieces and nephews. In addition to his parents; Don was preceded in death by his sister; Karen Perkis. A Mass of Christian Burial will be celebrated on Thursday at 10 a.m. in St. Mary's Roman Catholic Church, prayers of committal will follow in St. Mary's Catholic Cemetery, DeWitt, N.Y. The family will be present to receive friends on Wednesday from 4-6 p.m. in the Chapel of Riccardi Funeral Home, Cortland, N.Y. Please note, masks will be required for all those attending the visitation at the funeral home and the mass in church., regardless of vaccine status. In lieu of flowers donations may be made to Children's National Medical Center Burn Trauma Clinic 11 Michigan Ave, NW Washington, D.C. 20010 Condolences may also be sent to the family by visiting www.riccardifuneralhome.com

Mr. Donald H. Brooks, 80 of Cortland, N.Y. passed after a short illness on October 15, 2021. Don was born on October 8, 1941 in Syracuse, N.Y. to the late Howard and Katherine Brooks. He was a graduate of Most Holy Rosary High School and attended... View Obituary & Service Information

The family of Mr. Donald H. Brooks created this Life Tributes page to make it easy to share your memories.

Send flowers to the Brooks family.