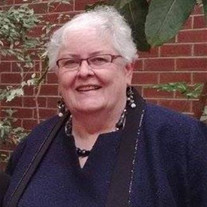 Catherine B. Niehus, 73, of Homer, died peacefully surrounded by her loving family on Saturday August 4, 2018. Born September 28, 1944 in Binghamton, Cathy was a daughter of William and Alice Roosa Bulger and was an area resident most of her life. She was a member of the 1962 graduating class of St. Mary’s Parochial School in Cortland, and had retired after 38 years of service at S.U.N.Y. Cortland where she was employed as a Senior Telephone Operator. Cathy was an active member and communicant of St. Margaret’s Roman Catholic Church where she served as a Trustee and Eucharistic Minister Co-Ordinator, and a member of their Shawl Ministry, for many years she was St. Margaret’s representative to St. Mary’s School Advisory Board. Additionally she was a member of the local cluster of Catholic Churches of which she represented St. Margaret’s. Cathy was a former President of the Cortland Jayncees as well as Past New York State District President. She was also a member of the Catholic Daughters of The Americas Court #919, Cortland where she currently served as Treasurer and was named Catholic Daughter of The Year. Cathy was awarded the Immaculata Medallion by Bishop Cunningham for her ministry and many dedicated years to St. Margaret’s Parish. Her family will cherish the memories that Cathy’s home was the place for many family gatherings throughout the years. Cathy is survived by her husband; Raymond “Ray” Niehus of Homer, two sons; Michael Niehus of Homer and Mark (Kristie) Niehus of Wadsworth, Ohio., two brothers; Timothy (Linda) Bulger of Groton, Conn and James (Helen) Bulger of Cortland, a sister; Margaret “Maggie” (Michael) Grant of Sebring, Florida., a grandson’ Andrew Niehus, two sister in laws; Susan Bulger of Peekskill, N.Y. and Marcia Bulger of Cortland., and several nieces, nephews and great nieces and nephews and extended family members in the Binghamton area. In addition to her parents, Cathy was preceded in death by two brothers; William J. Bulger, lll and Charles “Terry” Bulger and an infant sister; Bridget Bulger. A Mass of Christian Burial will be celebrated on Saturday at 10:30 a.m. in St. Margaret’s Roman Catholic Church with Rev. Paul J. Alciati serving as celebrant. Prayers of committal will follow in St. Mary’s Catholic Cemetery. The family will be present to receive friends on Friday from 5-8 p.m. in St. Margarets Catholic Church, Homer, N.Y. Contributions in Cathy’s memory may be made to St. Mary’s Parochial School, St. Margaret’s Church or the American Cancer Society. Condolences may also be sent to the family by visiting www.riccardifuneralhome.com Arrangements are under the direction of Riccardi Funeral Home, Cortland, N.Y.

Catherine B. Niehus, 73, of Homer, died peacefully surrounded by her loving family on Saturday August 4, 2018. Born September 28, 1944 in Binghamton, Cathy was a daughter of William and Alice Roosa Bulger and was an area resident most of her... View Obituary & Service Information

The family of Mrs. Catherine B. Niehus created this Life Tributes page to make it easy to share your memories.

Send flowers to the Niehus family.