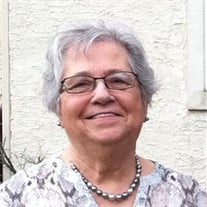 Barbara C. Tucker, 83, formerly of Cortland passed away March 6, 2019 at The Elizabeth Brewster House in Homer, N.Y. Born June 23, 1935 in Brooklyn, Barbara was an area resident most of her life. She was employed as a medical secretary transcriptionist for Dr. George Mauler and Dr. David Farber for 27 years and then by the Cortland Health Center from where she had retired. Barbara was a communicant of St. Mary’s Roman Catholic Church where she also served as a greeter. She had volunteered at Cortland Regional Medical Center and the Elizabeth Brewster House. Barbara enjoyed playing cards, reading, traveling and most of all, spending time with her family. Survivors include; two sons; John (Mary O’Connor) Tucker of Erdenheim, Penn., Jerome (Marie) Tucker of Wynnewood, Penn., and two daughters; Katherine (John Hudicka) Tucker of Bryn Mawr, Penn., and Elizabeth (Michael) Lynch of Cortland., a sister; Mary Ellen (Raymond) Burnham of Naples, Florida., six grandchildren; Melissa (Josh) Aiken, Greg (Amanda) Albro, Ciara, Maeve, Bridget and Leah; and great grandchildren; Logan, Emma, Madelyn and Cayden and several nieces and nephews, and good friends. A Mass of Christian Burial will be celebrated on Saturday at 10 a.m. in St. Mary’s Roman Catholic Church. Prayers of Committal will follow in St. Mary’s Catholic Cemetery. The family will be present to receive friends on Friday from 6-8 p.m. in the Chapel of Riccardi Funeral Home 69 N. Main St. Cortland, N.Y. Those who wish to honor Barbara’s memory in the form of a contribution are asked to consider; The Elizabeth Brewster House 41 S. Main St. Homer, N.Y. 13077. Condolences may also be sent to the family by visiting www.riccardifuneralhome.com The family extends its appreciation to the staff of the Elizabeth Brewster House and Hospice for their patient and kind care.

Barbara C. Tucker, 83, formerly of Cortland passed away March 6, 2019 at The Elizabeth Brewster House in Homer, N.Y. Born June 23, 1935 in Brooklyn, Barbara was an area resident most of her life. She was employed as a medical secretary transcriptionist... View Obituary & Service Information

The family of Mrs. Barbara C. Tucker created this Life Tributes page to make it easy to share your memories.

Send flowers to the Tucker family.