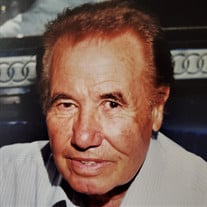 Mr. Ardin Mario DelVecchio, 94, of Cortland, New York passed away March 18, 2020. Born October 29, 1925 in Castleforte Italy, Ardin was the son of Mary and John DelVecchio. He came to the US in November of 1941 on the last departing ship from Italy. He grew up in Cortland, NY. Ardin was drafted into the US Army while attending Cortland High School and sent back to Europe as an American soldier in World War II. He was stationed at the 98th General Hospital in Germany as a medic, and was honorably discharged in May of 1946. Upon his return from the war, he married the love of his life; Franca DelVecchio, whom he met on a trip back to Italy. He celebrated and enjoyed 68 beautiful years with Franca in Cortland, NY. Upon discharge from the war, he briefly worked for the Wickwire Brothers then branched out to establish many businesses throughout Cortland. In 1949, Ardin opened a barbershop with his partner and good friend, Joseph Giuliano at The Hotel Cortland. From 1985 through 2005 he assisted his son, John DelVecchio, with opening many local businesses and events such as Cortland Car Wash, Mary Ann’s Ice Cream, The Peppermill Teen Dance, City Limits Night Club, and Pizza Palace. Throughout the years, he acquired many pieces of real estate and was always a favorite amongst his tenants. Ardin is survived by his devoted wife, Franca DelVecchio, son and daughter-in-law; John and Yvonne DelVecchio, and his daughter and son-in-law Mary Ann DelVecchio and George El-Hage. He has five grandchildren, John and Tracey DelVecchio, Nicholas El-Hage and Eve Penser, and Jameson DelVecchio. He was even blessed to enjoy time with his great grandchild, Elias El-Hage. Ardin had many loving siblings which he is also survived by. His sister, Eva and brother-in-law Fred Falso of Clearwater, FL, his brother-in-laws Ben Mazzucco of Connecticut and Anthony Romano of Connecticut, and his sister-in-laws Lina Mazzucco and spouse Tommaso Ficaio of Rome, Italy and Rosa Mazzucco of Scauri, Italy. Also, many loving nieces and nephews. He was preceded in death by brother; Peter DelVecchio. The DelVecchio family would like to extend sincere thanks to Dr. Wattoo and Nurse Aide, Leasa Raker whom have extended their time and expertise in caring for Ardin throughout his last few years of life. Due to COVID-19 concerns, funeral services will be reserved to close family only at this time. In lieu of flowers, donations can be made to: St. Anthony of Padua Church 50 Pomeroy Street, Cortland, NY 13045. Condolences may be sent to the family by visiting www.riccardifuneralhome.com Arrangements are under the direction of Riccardi Funeral Home, Cortland, NY

Mr. Ardin Mario DelVecchio, 94, of Cortland, New York passed away March 18, 2020. Born October 29, 1925 in Castleforte Italy, Ardin was the son of Mary and John DelVecchio. He came to the US in November of 1941 on the last departing ship from... View Obituary & Service Information

The family of Mr. Ardin M. Del Vecchio created this Life Tributes page to make it easy to share your memories.