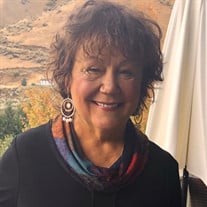 Alanna Boudreau was born to the late Gordon Payne and Anne MacArthur on September 22, 1951, in Mabou, Nova Scotia. She went home to her Lord on October 17, 2019, at her home in Cortland, New York, surrounded by family. Alanna was a force for good, a “lamp set on a hill”. She was a devoted wife and mother and the heart of her home. Her faith was the driving force behind her compassion, generosity, and warmth. She strove to build up the church community through hosting countless potlucks in her home, organizing multiple pilgrimages so that local youth could experience their faith in a new way, and lending a listening ear to any soul in need of tenderness. Alanna loved people and she loved music. Her favorite musician of all time was the late John Denver. In her early twenties she was a member of a nationally-renowned folk trio in Canada which traveled to military bases, providing cheering melodies for troops. She graduated from Mount St. Vincent University in Halifax, Nova Scotia, with a Bachelors of Science in Nursing, going on to work as a psychiatric nurse. Throughout her time in Halifax she earned a reputation as a marvelous singer on the club circuit, singing the hits of Patsy Cline. She would later channel this love for music into the youth of the Cortland area, establishing and directing a youth choir that drew kids from all over. Alanna was predeceased by her mother, Anne MacArthur; her father, Gordon Payne; step-father Allan Beaton; and brothers Terrance Payne and James Beaton. She is survived by her husband of 43 years, Bill, and their children: son Ian Boudreau and his fiancee Theresa Levine, son Zachary Boudreau, son Jacob Boudreau and his wife Michelle, daughter Magdalene Glemkowski and her husband Timothy, and daughter Alanna-Marie Boudreau. She is also survived by three grandchildren - Eva Glemkowski, Theo Glemkowski, and Lewis Mahon; as well as by her siblings Fran Payne, Marie (Larry) Elke, Dena (Jack) Redden, Jack (Heather) Payne, Joe (Robin) Beaton, and many nieces and nephews. Visiting hours will be from 5 - 7 PM on Thursday, October 24, at Riccardi Funeral Home, 69 N. Main Street, Cortland, New York, 13045. A funeral service celebrating her life will be held on Friday, October 25, 2019, at 11:00 AM at St. Anthony of Padua Roman Catholic Church 50 Pomeroy Street, Cortland, NY, 13045. Rev. Thomas Ward and Rev. Joseph Zareski will con-celebrate the Funeral Mass. In true Alanna form, all are welcome to attend. Alanna had a deep love for Franciscan spirituality, particularly its emphasis on embracing those in need. She worked closely with the Franciscan Friars of the Renewal over a 10-year period, and continued to hold a special place in her heart for their order. Memorial gifts made in Alanna’s memory can be made to Most Blessed Sacrament Friary, 375 13th Ave, Newark, New Jersey, 07103.

Alanna Boudreau was born to the late Gordon Payne and Anne MacArthur on September 22, 1951, in Mabou, Nova Scotia. She went home to her Lord on October 17, 2019, at her home in Cortland, New York, surrounded by family. Alanna was a force for... View Obituary & Service Information

The family of Mrs. Alanna Boudreau created this Life Tributes page to make it easy to share your memories.

Alanna Boudreau was born to the late Gordon Payne and Anne MacArthur...

Send flowers to the Boudreau family.